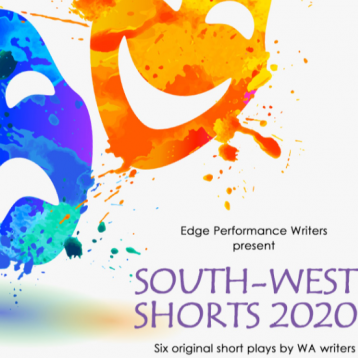 Congratulations to Nova resident Ted Witham, one of six finalists’ in the South West Shorts playwriting competition! This is a terrific achievement and we wish Ted and local actors Peter Seghini and Jonathan Tomlinson every success on the upcoming performance.

The following article was published in the Busselton Dunsborough Times 9 July 2020, written by Catherine Massey:

Excitement is brewing at Busselton Repertory Club as it prepares to perform in the South-West Shorts event 2020 at Margaret River HEART.

The event is an initiative from Edge Performance Writers as a way to foster relationships between Perth and South West writers for future collaborative opportunities.

Theatre artists from all over the South West are combining their talents to produce the six finalists’ plays from the South-West Shorts playwriting competition.

Local actors Peter Seghini and Jonathan Tomlinson along with director Margaret Sanft are hard at work rehearsing Meeting in the Middies, an original play by Busselton playwright Ted Witham.

“I’m very proud to be directing Ted Witham’s play because I’ve never worked closely with the writer of a play before,” Sanft said. “It was lovely to meet with him and find out what he envisioned for the script.”

Sanft said she hopes she can bring Ted’s vision to life.

“I hope he will sit in the audience and be very pleased with how his play looks in real life.”

South-West Shorts will be the first theatrical performance in the main theatre at Margaret River HEART since its reopening and the first time a Busselton theatre group has performed at the venue.

They will be joined by cast and crew from Margaret River, Esperance, Molloy Island, and Manjimup, along with three groups from Perth in a unique performance that gives WA writers an opportunity to have their work developed and produced.

Six original short plays and one performance poetry piece by special guest Sari Bennett will be performed, with three of these plays created by South West playwrights and the other three from Perth.

The performance will be held on Saturday, August 1, for one night only, and will also be live streamed on Zoom.